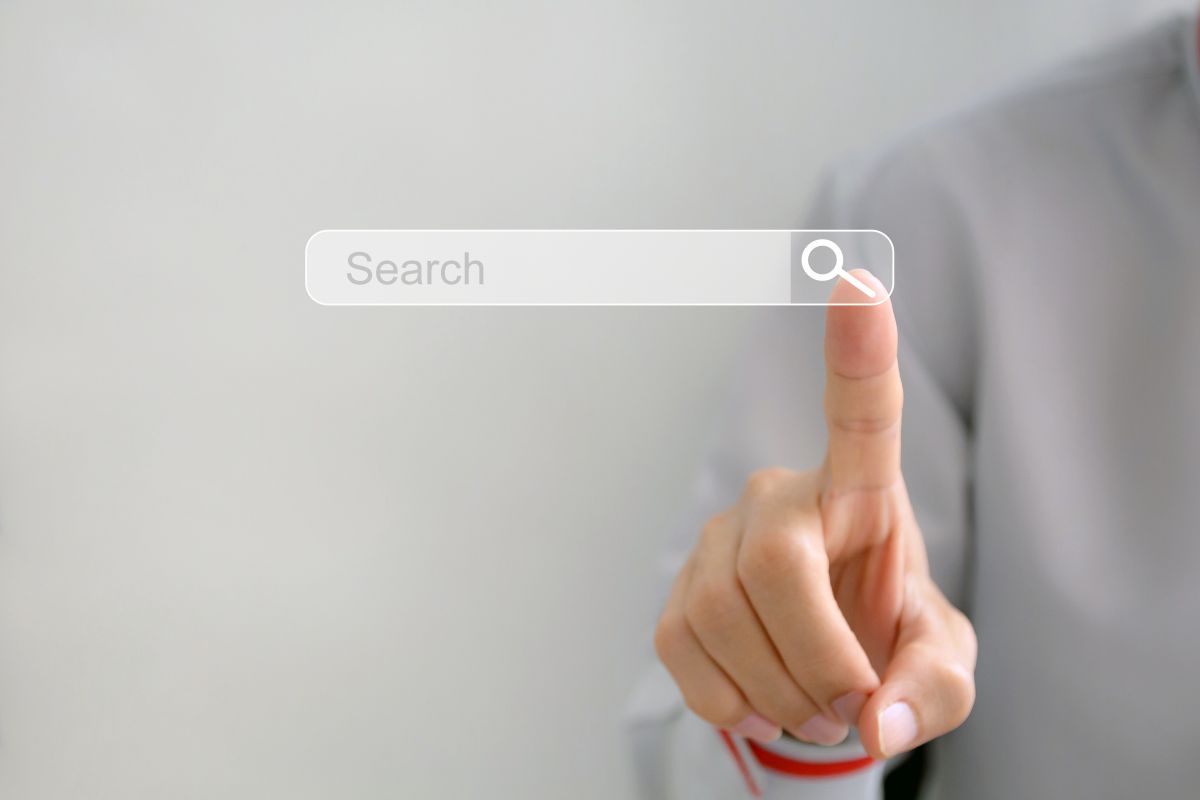 5 secrets that Google doesn't tell you about ROAS 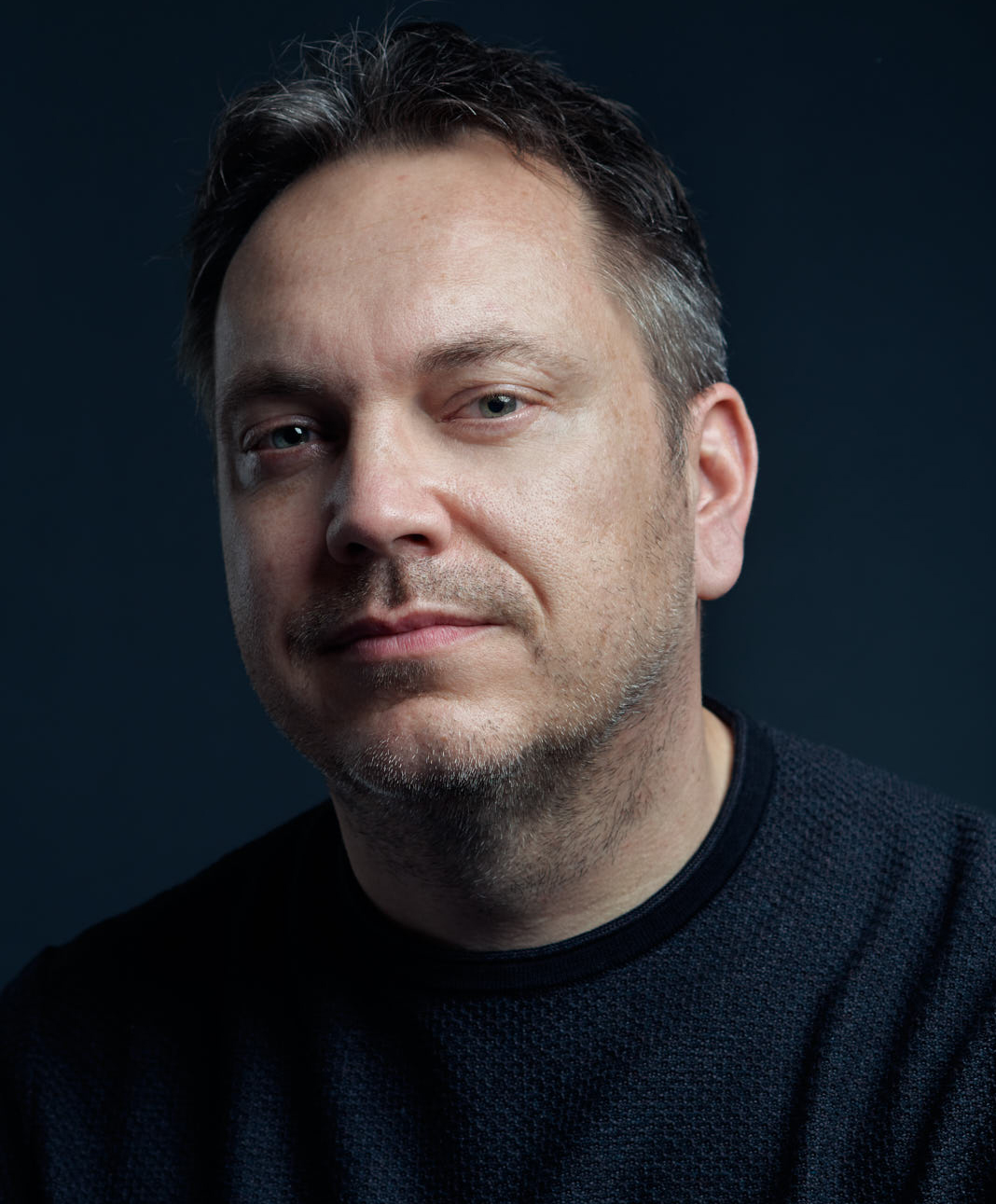 In Google Ads campaigns, you can very easily manage your campaign bidding. All you need to do is set a Return On Ad Spend (ROAS) target. Really easy: once you've set it, you can forget about it.

Google often automatically knows how to get good results, which are often better than when you manage bids manually. This means you also benefit from the advantages of automation, or so you'd think...

Unfortunately, that's not the case. Obviously, you are also giving your wallet to a commercial business which wants to make even more profit. So, Google is all too happy to put part of the success of target ROAS bidding into its own pocket.

We explain below why Google gets you to pay more for your ads without you realizing it. We reveal 5 secrets about ROAS which Google won't tell you.

Download Tip: Everything you need to know about Google Performance Max Campaigns


Many advertisers like to think in terms of a percentage that they want to spend on ads compared with the sale turnover. For example, you want to spend 5% or 25% of the turnover on ads. A simple measure to express this is the Advertising Cost Of Sales, or ACOS.

In simple terms, ROAS is just 1/ACOS. You then get a very different number that is much less easy to interpret and instead of a simple linear relationship, it's suddenly about an exponential relationship.

So, why does Google use a ROAS and not ACOS?

There are 3 possible reasons:

1. ACOS includes the word costs. That has less pleasant associations than return, which is used in the term ROAS. Return simply sounds much more positive.
2. PPC specialists are used to lowering bids to spend less. Lowering sounds positive. However, if you lower your ROAS, you actually increase your bids.
3. Google makes it extra difficult with ROAS. Bidding becomes slightly 'fuzzy', and you don't realize that you are spending more.

Anyone who charges costs and pays VAT will always think in terms of including or excluding VAT. Google looks at it differently.

The costs in Google Ads are always shown without VAT, while the revenue that is presented includes VAT. In fact, it's even worse, because your shipping costs are usually not deducted from your revenue either.

3) ROAS is not yet profit

ROAS sounds good, because you are talking about return. But what about the costs here? A good ROAS may not mean that you also make a lot of profit.

So, it's much better to think in terms of POAS, or Profit On Ad Spend. Here, you take costs and cost patterns into account. POAS is used as a measure by increasing numbers of advertisers.

See how POAS works in the following example: 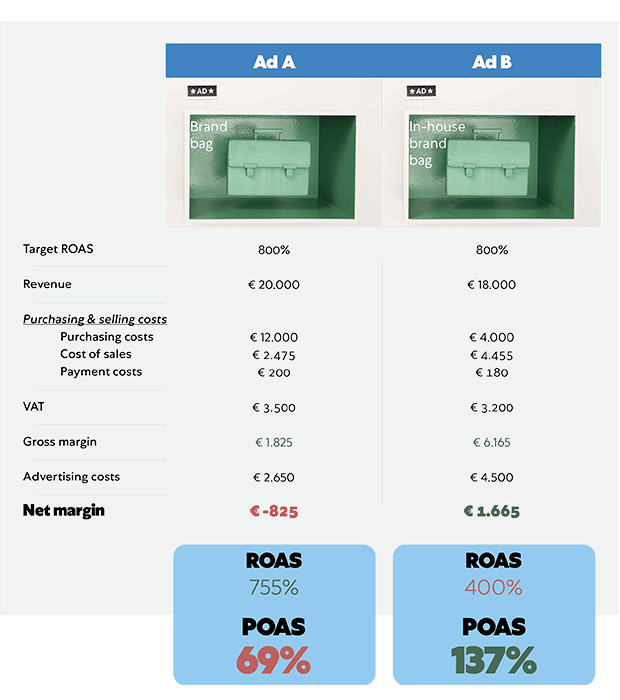 Based on ROAS, you probably stopped ad B. However, that would have been a wrong choice, because when you look at the profitability of the ads, you see that ad B (POAS >100%) wins over ad A.

POAS <100%, in the case of ad A, means that your margin is smaller than your Ads costs, and that you therefore run a loss. Read more about POAS in this article.

4) Google focuses on an average ROAS

The fourth secret relates to the average ROAS. Because Google focuses on an average ROAS, which is no coincidence.

Google obviously ensures that you achieve that percentage. That feels good, because you feel that you have your bids under control and don't need to worry about them. You probably don't mind if one product performs slightly better than the other. "That happens."

But what about if you knew that for a product with a profit margin of 30%, you were spending 50% on ads instead of 10%? You would probably immediately stop that ad because you were making a considerable loss, which is the last thing you want. However, it is very likely that this is happening with an average ROAS.

That's because the Google algorithm first looks for the best chances for you to achieve a high return.

• Advertising on your brand name is very profitable for Google. Clicks on your brand name are very cheap in Google due to the high Click Through Ratios (CTRs) and people often have high conversion rates.
• If Google knows that someone has left the shopping basket, it can retarget that person. The chance that this person would convert was already high, but Google can claim the turnover by the click on their banner. The extra turnover that you get from that click is therefore very low.
• Google will first advertise on your hard sellers with high conversion percentages. They don't cost much and generate quite a lot and you might have also sold them without the "help" of Google.
• Google will first advertise on your best performing search terms, because best performing means low ACOS.

Through all these great chances for Google, your return is much higher than you set. Google then automatically looks further and searches for less strong chances.

At a given moment, Google finds chances which give nearly the same return as you set, but your average return is still higher than what you set. Google can therefore continue searching until your average is reached.

So, Google goes from (too) high return, to your set return, to low return to ultimately achieve an average. But by doing so, however, they spend too much of your money.

In short: your average ROAS that you set is not the incremental ROAS for your last extra sale. In practice, that last extra sale can generate a heavy loss.

Incremental also means the following: suppose you only advertise on your brand name. You will then achieve a very high return (for example a ROAS of 2,000%). If you then advertise on a general search term with a lower return (1900%), the extra return on that term is the incremental return. The average return (1950%) also falls, but less fast.

Besides ads in Google Shopping, Google will show you for all kinds of search terms in different environments. They do this by retargeting banners, for example, or by showing ads on YouTube.

In the following (illustrative) table with random examples, you can see how it works. Logically, Google does not show this data. If you would be able to check this, you suddenly see how much Google benefits from automation: 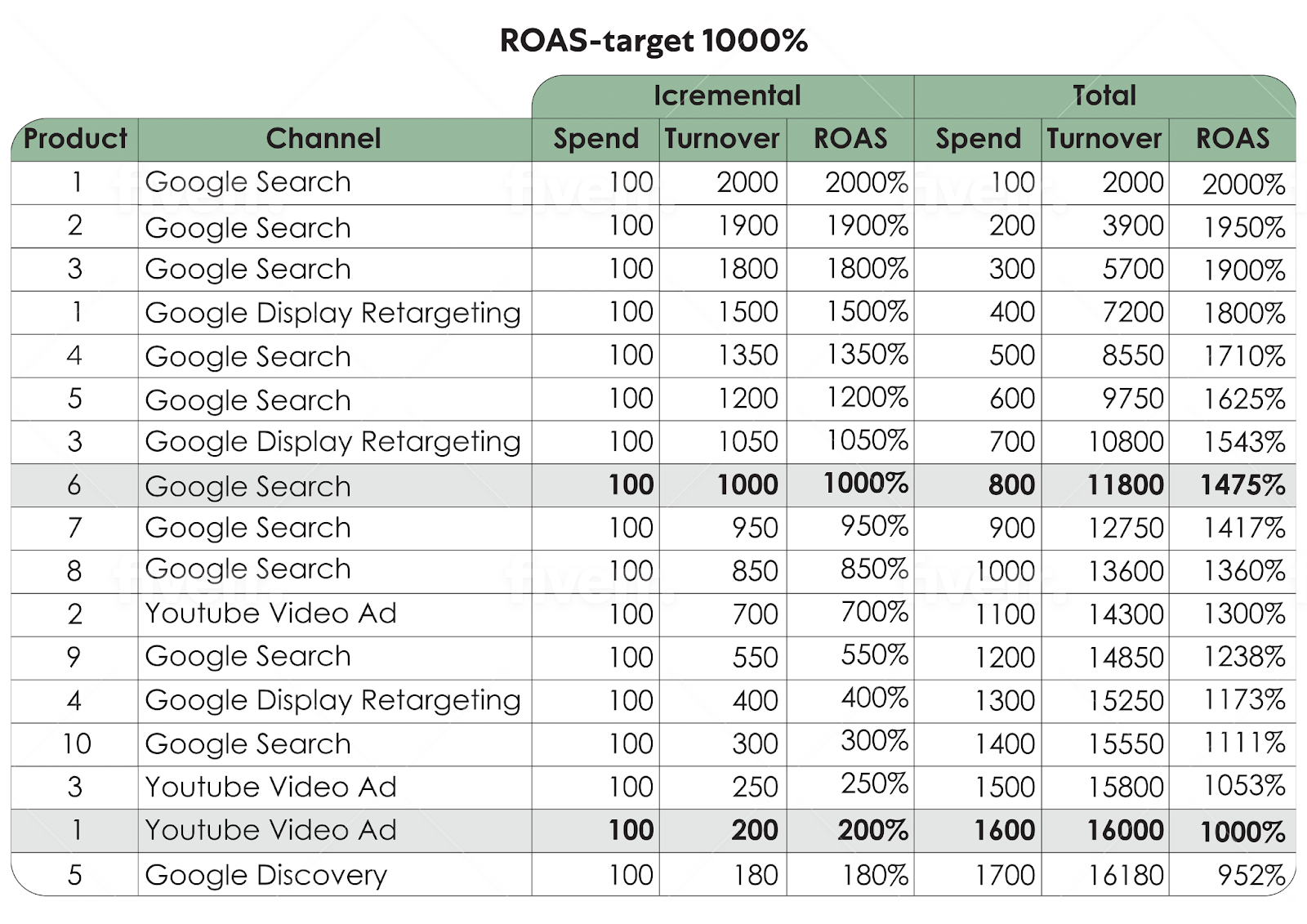 Finally, we look at the "handy" Google resource: the bid simulator. This gives you insight into the turnover you might have achieved if you had bid more or less. Very useful, you might say. You see how many impressions you get, how many clicks you may expect, and therefore what the costs and turnover will be.

Particularly if you start bidding more (so you lower your ROAS), the quality of your traffic will decline. Because Google will increasingly show you for broader and/or less relevant search terms, which generate relatively fewer sales. Your conversion ratio falls and with a lower ROAS, your extra revenue is also lower. But Google obviously doesn't tell you that.

So, take Google predictions with a pinch of salt, and don't suddenly adjust ROAS too much. Take small steps and check what the effect is.

Conclusion: what should I do with my ROAS?

You are now probably wondering what you should do with the ROAS measure.

1. Make it easy for yourself by thinking in terms of ACOS instead of ROAS.
2. Check how you measure turnover in campaigns. Does that include or exclude VAT and shipping costs, and are the ROAS targets you set still good?
3. Don't be tempted to bid too much, by continuing to lower your ROAS.
4. Be aware of your incremental ROAS.
5. Convert your ROAS into POAS and balance your turnover development with your profit development.
6. Don't take the bid simulator too seriously. According to Google, your conversion ratio stays the same for each ROAS, but that's not the case.

Finally, it's always wise to use data driven Google Automation software, which can automatically make POAS calculations for you.

Better focus on input which you send to Google also guarantees that you can focus better on your KPIs.