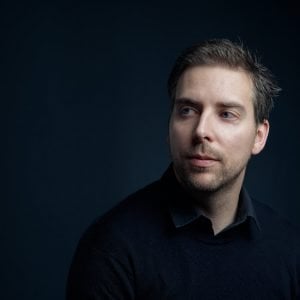 Hagakure is the new Google Ads structure for Search Campaigns that optimally responds to Machine Learning. Hagakure is a Japanese word that means something like “hidden by the leaves.”

It represents a practical and spiritual path for the Japanese samurai warrior. If you translate this into Google Ads, you could see this as a “practical path” for structuring your Google Ads campaigns.

In a previous article, I told you all about Search Ads campaign structures. At that time, the Hagakure method had only just been created. I have good news, we are now fans because the results of this Google Ads structure are clear.

In this article, I explain why this new structure fits within the developments at Google, how the Hagakure method relates to other structures and what the basic principles are. Finally, I will show you the great results of five international cases.

The Hagakure method in Google Ads is a logical step in a timeline where Google is increasing automation, from dynamic advertisements to smart bidding. Keywords are also being activated more widely for certain search terms, and not all search terms are more transparent to the advertiser. In the meantime, Google’s algorithms on the back have also gotten better. 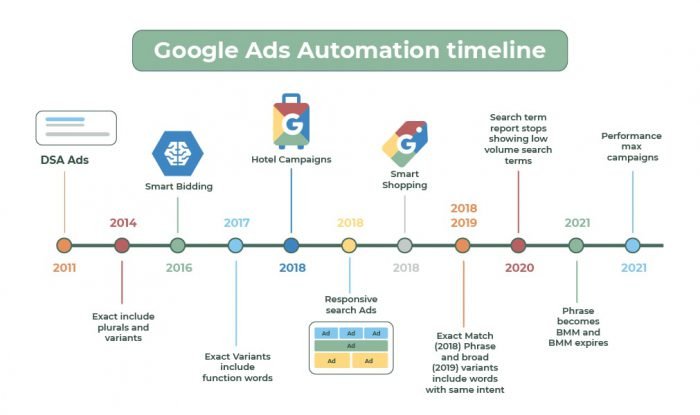 As a result, Google’s algorithms are increasingly able to determine the right offer and to display the right advertisement for every interaction. This leads to traditional SKAG (Single Keyword Ad Groups) campaign structures becoming the preferred choice in fewer and fewer cases.

From manual to smart bidding

In the image below, I try to show you at a glance what the change from SKAG to Hagakure entails.

The Hagakure structure is much more consolidated than the SKAG structure in that the different keyword options are in the same ad group and the DSA ad group is in the same campaign as the standard ad groups. 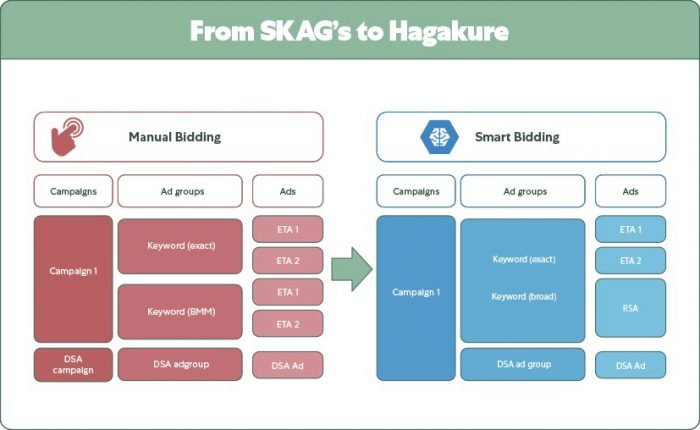 The Hagakure has four major advantages over other structures:

The smart bidding strategies of Google, including the Hagakure, come into their own when you adhere to the following best practices:

Ultimately, the idea behind Hagakure is that you only end up with ad groups with significant volumes. That way, you can make full use of Google’s smart algorithms. After all, more volume means more data, and data is the fuel of algorithms.

The more data an algorithm has, the more accurately an algorithm can determine the right bid and the right combination of ad creations. With this Search structure, you also give Google the space to use all relevant placements. As a result, you realize more impressions, interactions, and ultimately turnover.

Obviously, we have also extensively tested the above best practices in our PPC management software, and we would like to share the results with you. We have set up this structure in different accounts in different countries to eliminate the influence of the “country” factor. Since we had to completely change the structure in the account, we could not test with the experiment functionality in Google Ads.

We also disregarded accounts with strong seasonality so that the results would not give a distorted picture. The results of the test accounts were compared in Google Ads with the results of the previous period. The length of the period varied from account to account, but it was always a period of equal length.

The cases below show the results of (anonymized) retail accounts where we only looked at the non-branded campaigns. For example, the influences of the search traffic for the own brand name were not considered.

It is good to know that accounts affected by COVID-19 showed a strong improvement anyway because consumers are buying more online.

Case 1 in the UK: From 100 SKAG campaigns with manual bidding to 1 Hagakure campaign with smart bidding:

Case 2 in Germany: from a SKAG structure (manual bidding) to Hagakure (smart bidding):

In the vast majority of cases, you see a very strong improvement in the results. In some cases, such as in case 5, the results were slightly worse. The few accounts in which we saw worse results were often small (few clicks and conversions), which meant that the algorithms had less data and in which the chance factor plays a greater role. In addition, the uplift was often greater if, in addition to a change in structure, a switch was also made to smart bidding.

However, the uplift was still significantly increased compared to accounts from other countries within these organizations, where the structure had not been adjusted. In addition to the above cases, we have run many other cases with similar results. In most cases, the results had improved significantly.

Automation of texts and keywords

Therefore, the new Campaign structure means that you have to create fewer ad groups. However, your challenge remains to keep the advertisements as relevant as possible. For this, it is important that you dynamically load keywords into the ad text using keyword insertion – with which you allow the user’s search query to be reflected in the ad.

Are there many different combinations relevant on which you want the ads to appear? Then it is highly recommended, especially for large-scale accounts, that you use a Search Ads automation tool like Adchieve. Using it, you can create different ad group strategies and determine which keywords from your product feed should be used for each strategy.

This way, you can quickly build the campaigns and ensure that your advertisements stay up-to-date at all times. You can also easily schedule ad texts for a temporary promotion so that you no longer have to perform manual actions on the day itself.

Want to know more about this Search Ads structure? Recently I gave a webinar about the Hagakure method and the benefits that its automation offers. Watch the Hagakure webinar here.