Are you looking for tips on how to better use your Smart Shopping Campaigns? Then this article might help you further.

Last year Google Smart shopping introduced: the automated version of Google Shopping. Unfortunately, with this ‘Smart’ automation, campaigns can be steered less causing many conversions to be applied over one single measure.

Because of that a much heard ‘criticism’ about Smart Shopping is it steering too much on users that have already bought from you. We call this the selection-effect.

Pro’s and cons of Smart Shopping

Smart shopping has, as you probably have discovered, many pro’s: it is easy to set up and to manage, you have a big reach and it uses all signals that Google uses for smart bidding. Next to that it also bids with a powerful, self-learning algorithm during the bidding (also called auction time bidding).

One of the biggest criticisms on Smart Shopping-campaigns is that the algorithms (in other words: a series of instructions for a specific goal) tend to focus on your existing clients or on clients that already have had interaction with your site or brand in the past.

Why doesn’t solve Google this ‘problem’?

Google has made Smart Shopping Campaigns nontransparant by removing search word-data and data about the share remarketing from their report. Google itself says it wants to make it easier, but it’s also plausible that Google preferably wants to steer you on the selection-effect: after all, the more revenue value they can grant, the more money you spend.

Because of that you can’t see how big the percentage of clicks is that has entered via your own brand name, or via a remarketing banner on Youtube or the Google Display Network for example. In other words: The users at the ‘end of your conversion funnel’ that otherwise potentially already would have bought from you.

If you could steer better on your Smart Shopping Campaigns (that’s what Google has turned off), you prevent Google steering too much on these users that would have otherwise already bought from you. Below I explain how to do this in 5 steps: 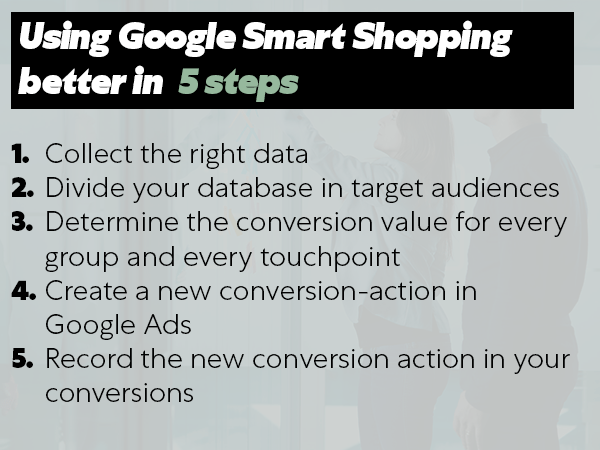 Always start with collection the right first-party data: That is data of your own website-visitors and buyers in your system like WooCommerce, Magento, Wix, Shopify or a different system. Save this data.

Because of the amount of data it is useful to use a system like Google Big Query for this. You need this data thereafter for analysis and to upload the data eventually to Google Ads.

The GCLID is also one of the data components that you are going to collect. Because of this parameter in your URL you can recognise from which advertisement someone has come to you

and what type of user it is (User ID). Other data might also be of importance, when the last sale has been for example. That for example, looks like this:

To keep up the GCLID and link it to a specific order, you can allocate the right conversion value to a given advertisement click later on.

The GCLID is adjusted the easiest via the Google Tag Manager (GTM) and a hidden field at the order form.

2. Divide your database in target audiences

You can divide and characterise groups in the following ways:

You can divide the last group further if that’s interesting, for example through using the RFM-model (recency, frequency, monetary value). However, that is a next step.

3. Determine the conversion value for every group and every touchpoint

The next step is more complex and demands the expertise of a specialist (with a data-science background), unless you want to do this on the basis of assumptions or possibly benchmark-data.

Someone could have seen your Youtube-advertisement first for example, afterwards land on your website via a Google text-advertisement, to eventually buy a product from you the next day, after having seen a Facebook remarketing advertisement. The multichannel attribution model determines what value is appropriated to every one of the different touch points mentioned above.

What is incremental uplift and why is it important?

Add results of an incremental uplift-test to the multi channel-attribution model to determine the right incremental value per click depending on the conversion-route and target audience.

With incremental uplift, you measure if an event, like a conversion, wouldn’t have happened without a specific interaction, like an advertisement showing. With that you get an answer to the question if your advertisements have truly made an impact on the revenue, or if they might claim credit for an action that otherwise would have also happened.

Create a new conversion-action in Google Ads so that you can impost all conversions you have saved (so also the ones from the past) with help of GCLID. 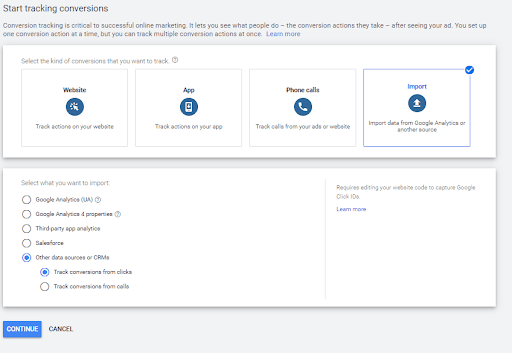 5. Record the new conversion action in your conversions

Because you are adding the right value to the right conversions with these 5 steps, you avoid the selection bias of Smart Shopping Campaigns.

Mind you: You advertise best if you combine several disciplines in your ‘Ads-recipe’: A lot of knowledge about your company, a Google (Ads)-specialist, a data-scientist and good software/tooling.

Side note: Of course we work in a dynamic environment where we get new knowledge on a daily base. Google is also moving and the roadmap can be subject to change because of that.